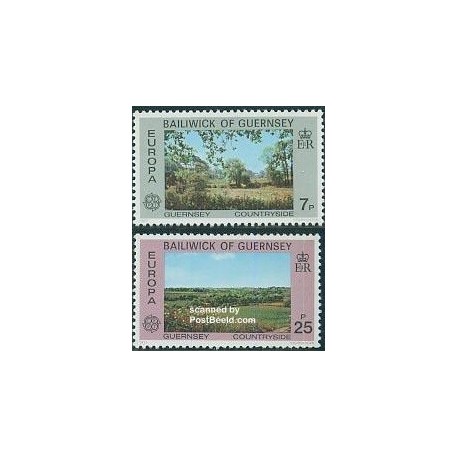 Guernsey (/ˈgɜ:nzi/, /ˈɡɜrnzi/ GURN-zee), officially the Bailiwick of Guernsey (French: Bailliage de Guernesey, IPA: [bajaʒ də ɡɛʁnəzɛ]), is a possession of the Crown in right of Guernsey in the English Channel, off the coast of Normandy. As a bailiwick, Guernsey embraces not only all ten parishes on the Island of Guernsey, but also the islands of Alderney and Sark – each with its own parliament – and the smaller islands of Herm, Jethou and Lihou. Although its defence is the responsibility of the United Kingdom,[3] the Bailiwick is not part of the United Kingdom but rather a possession of the British Crown. It lies within the Common Travel Area of the British Isles and is not a member of the European Union, but has a special relationship with it, being treated as part of the European Community for the purposes of free trade in goods. Together, the Bailiwick of Guernsey and Bailiwick of Jersey form the geographical grouping known as the Channel Islands.

The name "Guernsey", as well as that of neighbouring "Jersey", is of Old Norse origin. The second element of each word, "-ey", is the Old Norse for "island", while "Guern" resembles the Spanish Cuerno and means horns.[citation needed]

Around 6000 B.C., rising seas created the English Channel and separated the Norman promontories that became the bailiwicks of Guernsey and Jersey from continental Europe.[4]Neolithic farmers then settled on its coast and built the dolmens and menhirs found in the islands today.

During their migration to Brittany, Britons occupied the Lenur islands (the former name of the Channel Islands[5]) including Sarnia or Lisia (Guernsey) and Angia (Jersey). Travelling from the Kingdom of Gwent, Saint Sampson, later the abbot of Dol in Brittany, is credited with the introduction of Christianity to Guernsey.[6]

In 933 the islands, formerly under the control of William I, then Duchy of Brittany were annexed by the Duchy of Normandy. The island of Guernsey and the other Channel Islands represent the last remnants of the medieval Duchy of Normandy.[6]

During the Middle Ages, the island was a haven for pirates that would use the "Lamping Technique" to ground ships close to her waters . This intensified during the Hundred Years War, when, starting in 1339, the island was occupied by the Capetians on several occasions.[6]

In 1372, the island was invaded by Aragonese mercenaries under the command of Owain Lawgoch (remembered as Yvon de Galles), who was in the pay of the French king. Lawgoch and his dark-haired mercenaries were later absorbed into Guernsey legend as invading fairies from across the sea.[7]

Castle Cornet seen at night over the harbour of St Peter Port.

In the mid-16th century, the island was influenced by Calvinist reformers from Normandy. During the Marian persecutions, three women, the Guernsey Martyrs, were burned at the stake for their Protestant beliefs.[8]

During the English Civil War, Guernsey sided with the Parliamentarians. The allegiance was not total, however; there were a few Royalist uprisings in the southwest of the island, while Castle Cornet was occupied by the Governor, Sir Peter Osborne, and Royalist troops. Castle Cornet was the last Royalist outpost anywhere in the British Isles to surrender.

Wars against France and Spain during the 17th and 18th centuries gave Guernsey shipowners and sea captains the opportunity to exploit the island's proximity to mainland Europe by applying for Letters of Marque and turning their merchantmen into privateers.

By the beginning of the 18th century, Guernsey's residents were starting to settle in North America.[9] The 19th century saw a dramatic increase in prosperity of the island, due to its success in the global maritime trade, and the rise of the stone industry. The island of Guernsey seen from 33,000 feet looking North

For most of World War II, the Bailiwick was occupied by German troops. Before the occupation, many Guernsey children had been evacuated to England to live with relatives or strangers during the war. Some children were never reunited with their families.[11] The occupying German forces deported some of the Bailiwick's residents to camps in the southwest of Germany, notably to the Lager Lindele (Lindele Camp) near Biberach an der Riß. Guernsey was very heavily fortified during World War II out of all proportion to the island's strategic value. German defences and alterations remain visible.

The deliberative assembly of the States of Guernsey (French: les États de Guernesey) is called the States of Deliberation (French: Les États de Délibération) and consists of 45 People's Deputies, elected from multi- or single-member districts every four years. There are also two representatives from Alderney, a semi-autonomous dependency of the Bailiwick, but Sark sends no representative. The Bailiff or Deputy Bailiff preside in the assembly. There are also two non-voting members: H.M. Procureur (Attorney General) and H.M. Comptroller (Solicitor General), both appointed by the Crown and collectively known as the Law Officers of the Crown.

A Projet de Loi is the equivalent of a UK Bill or a French projet de loi, and a Law is the equivalent of a UK Act of Parliament or a French loi. A draft Law passed by the States can have no legal effect until formally approved by Her Majesty in Council and promulgated by means of an Order-in-Council. Laws are given the Royal Sanction at regular meetings of the Privy Council in London, after which they are returned to the Islands for formal registration at the Royal Court.

The States also make delegated legislation known as 'Ordinances (Ordonnances)' and 'Orders (Ordres)' which do not require the Royal Assent. Commencement orders are usually in the form of Ordinances.

Each parish is administered by a Douzaine. Douzeniers are elected for a six-year mandate, two Douzeniers being elected by parishioners at a parish meeting in November each year. The senior Douzenier is known as the Doyen (Dean). Two elected Constables (French: Connétables) carry out the decisions of the Douzaine, serving for between one and three years. The longest serving Constable is known as the Senior Constable and his or her colleague as the Junior Constable.

The legal system is Guernsey customary derived from Norman French customary law, heavily influenced and overlaid by English common law, justice being administered through a combination of the Magistrates' Court and the Royal Court. Members of Guerney's legal profession are known as Advocates (French: Avocats), there being no distinction between solicitors and barristers as in England and Wales: Guernsey Advocates fulfil both roles. The Royal Court of Guernsey (French: la Cour Royale de Guernesey) is made up of the Bailiff (French: le Bailli), who presides and determines issues of law, and between twelve and sixteen Jurats (French: Jurés-Justiciers de la Cour Royale), who determine issues of fact and are elected to office by an electoral college known as the States of Election (French: les États d'Élection). Appeals lie from the Royal Court to the Guernsey Court of Appeal and thereafter to the Judicial Committee of the Privy Council.[13]

While Guernsey has complete autonomy over internal affairs and certain external matters, the topic of complete independence from the British Crown has been discussed widely and frequently, with ideas ranging from Guernsey obtaining independence as a Dominion to the bailiwicks of Guernsey and Jersey uniting and forming an independent Federal State within the Commonwealth, whereby both islands retain their independence with regards to domestic affairs but internationally, the islands would be regarded as one state.[6] The Bailiwick of Guernsey.

Guernsey contains two main geographical regions, the Haut Pas, a high southern plateau, and the Bas Pas, a low-lying and sandy northern region. In general terms, the Haut Pas is the more rural of the two, while the Bas Pas is more residential and industrialised.

There is a large deepwater harbour at St Peter Port. The Casquets, a group of islets, are notable for the lighthouse facility constructed there.

The climate is temperate with mild winters and warm sunny summers. The warmest months are July and August, when temperatures are generally around 20 °C (68 °F) but occasionally reach 24 °C (75 °F). On average, the coldest month is February with an average weekly mean air temperature of 6 °C (42.8 °F). Average weekly mean air temperature reaches 16 °C (60.8 °F) in August. Snow rarely falls and is unlikely to settle, but is most likely to fall in February. The temperature rarely drops below freezing, although strong wind-chill from Arctic winds can sometimes make it feel like it. The rainiest months are December (average 108 mm (4.3 in)), November (average 98 mm (3.86 in)) and January (average 89 mm (3.50 in)). July is, on average, the sunniest month with 250 hours recorded sunshine; December the least with fifty hours recorded sunshine.[17] 50% of the days are overcast.